On a recent morning at Gresham Middle School, students in Nicole Resmondo’s class were getting ready for “Trap Tuesday.”

Before leading them out a back door, the 6th-grade science teacher highlighted a roster of jobs and asked for volunteers, including paper collector, paper switcher, water carrier and cup refiller.

Once the volunteers were identified, students walked out of the building and across the school’s campus to a hillside, where a series of plastic water cups was scattered in different locations.

At one of those locations, Resmondo and a small group of students examined the cup and the teacher pointed out dozens of mosquito larvae. The tiny, thread-like creatures were squirming in the water, prompting cries of “Wow!” and “Oh my gosh!” from students, who used a clipboard to take notes.

The activity is part of an effort to trap mosquitos and study their populations, and it's giving Gresham students a hands-on look at how scientific research works. But they’re not the only ones who are benefiting from the effort.

The research -- part of a USDA-funded project awarded to the University of Tennessee Institute of Agriculture that is known as the MEGA:BITESS Academy -- is providing valuable data that will help scientists understand La Crosse encephalitis, a mosquito-borne disease.

Becky Trout Fryxell, an associate professor at UTIA, is the principal investigator for the project, which involves schools across East Tennessee, including several within KCS. Trout Fryxell said that because La Crosse encephalitis affects a relatively small number of people, it’s hard to obtain funding to study its transmission.

But she said a community-driven surveillance program can go a long way toward understanding the disease and the mosquitoes that carry it. “Right now we’re sitting at temperatures in the ‘90s and we haven’t had any rain, so these cups are going to be the sole places where a lot of these mosquitoes are laying their eggs,” she added. 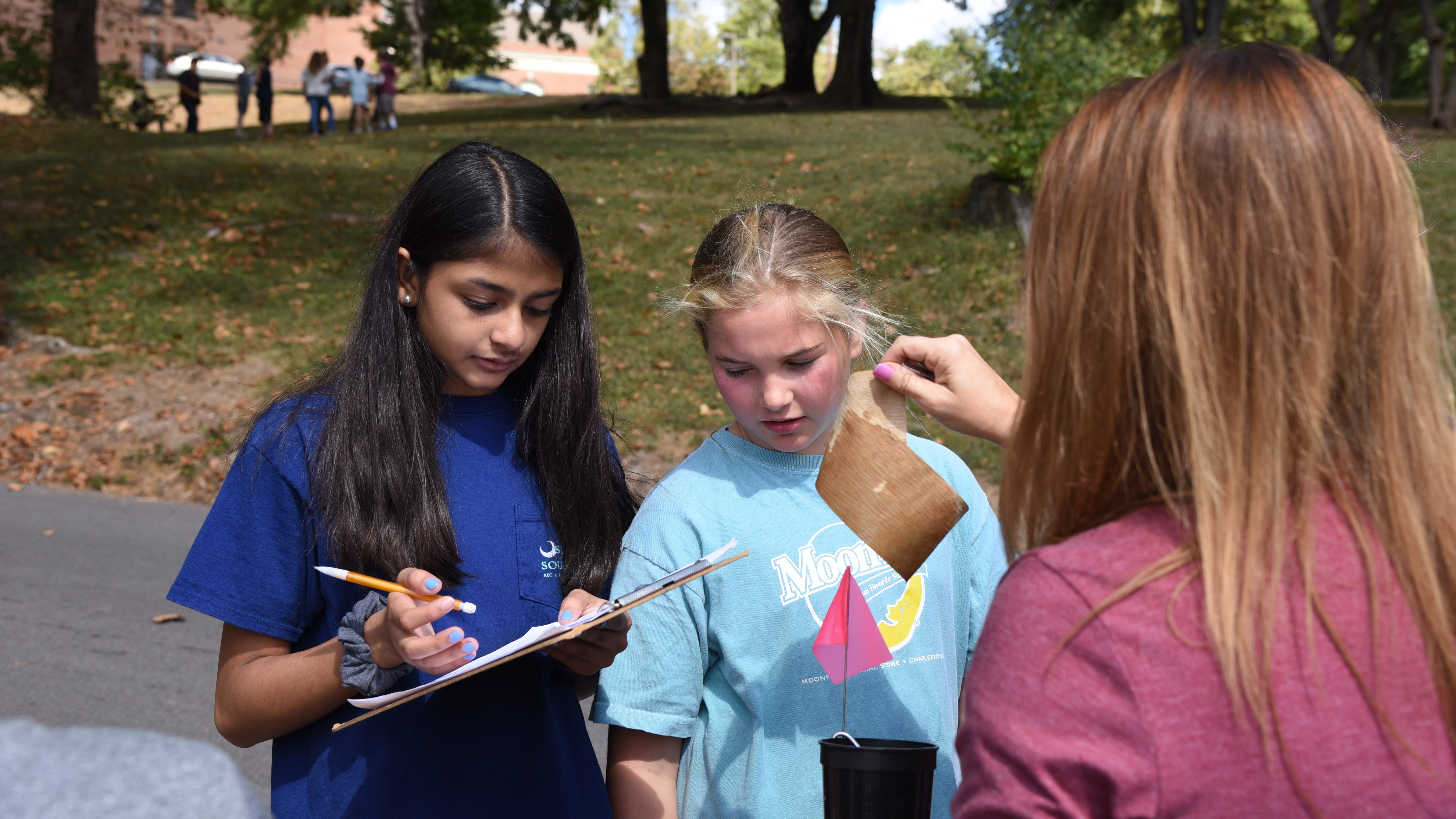 6th-graders Hetvi Patel, left, and Sophia Smelcer record data while Gresham Middle School teacher Nicole Resmondo examines seed germination paper. Students at Gresham are participating in a research study led by the University of Tennessee Institute of Agriculture that aims to promote science careers and to increase understanding of how La Crosse encephalitis is transmitted by mosquitos.

In order to gather data, students prepare water for the traps by mixing it with bovine liver powder and storing it in a closed bucket for seven days. They pour the water into the mosquito traps, plastic cups that are geo-coded by location and that include seed-germination paper which captures mosquito eggs.

Every week the students collect data about how many eggs, larvae and pupae are collected in each trap, paying special attention to factors such as sunlight or shade and how they affect the results.

After recording the data, the old water and any larvae are poured out while the egg papers are dried out so the eggs go dormant. The eggs are then sent to UT, which tries to hatch them in a secure environment and tests the resulting mosquitos for La Crosse.

Resmondo was part of the state committee that writes curriculum standards for science in Tennessee, and currently serves on the Knox County science curriculum team. She’s a strong believer in allowing students to do actual science and said that by asking questions, looking at data and participating in hands-on experiments, students gain a fuller understanding.

“If you just read about it, it kind of comes in one ear and out the other,” Resmondo said. “When you do the science, it’s something that you won’t forget.”

In fact, inspiring students to pursue science careers is central to the initiative. Trout Fryxell said the main goal of the project is to promote workforce development, with the idea that students will get a taste of disciplines such as agriculture, entomology, geography, and science communication, and pursue those careers when they finish school.

Last summer, participating teachers attended a summer workshop that focused on the experimental side of the project, and early next year they’ll attend workshops that highlight geospatial analysis and communication skills.

Participating teachers get a small reimbursement, and Trout Fryxell said the project is seeking more teachers for next year’s cohort.

After gathering their data, Gresham students returned to class and discussed the things they’ve learned, including the environmental factors that attract mosquitoes, the role of vectors in spreading disease and the physical markings of the Asian Tiger mosquito.

In an interview, 6th-grader Hetvi Patel said she loves doing experiments and wants to be a veterinarian when she grows up. Patel said she’s learned a lot from Resmondo, including the value of making mistakes and learning from them.

“I love doing experiments and actually seeing (science) instead of just learning it,” she said.

To learn more about the MEGA:BITESS program or support its work, visit https://www.megabitess.org. 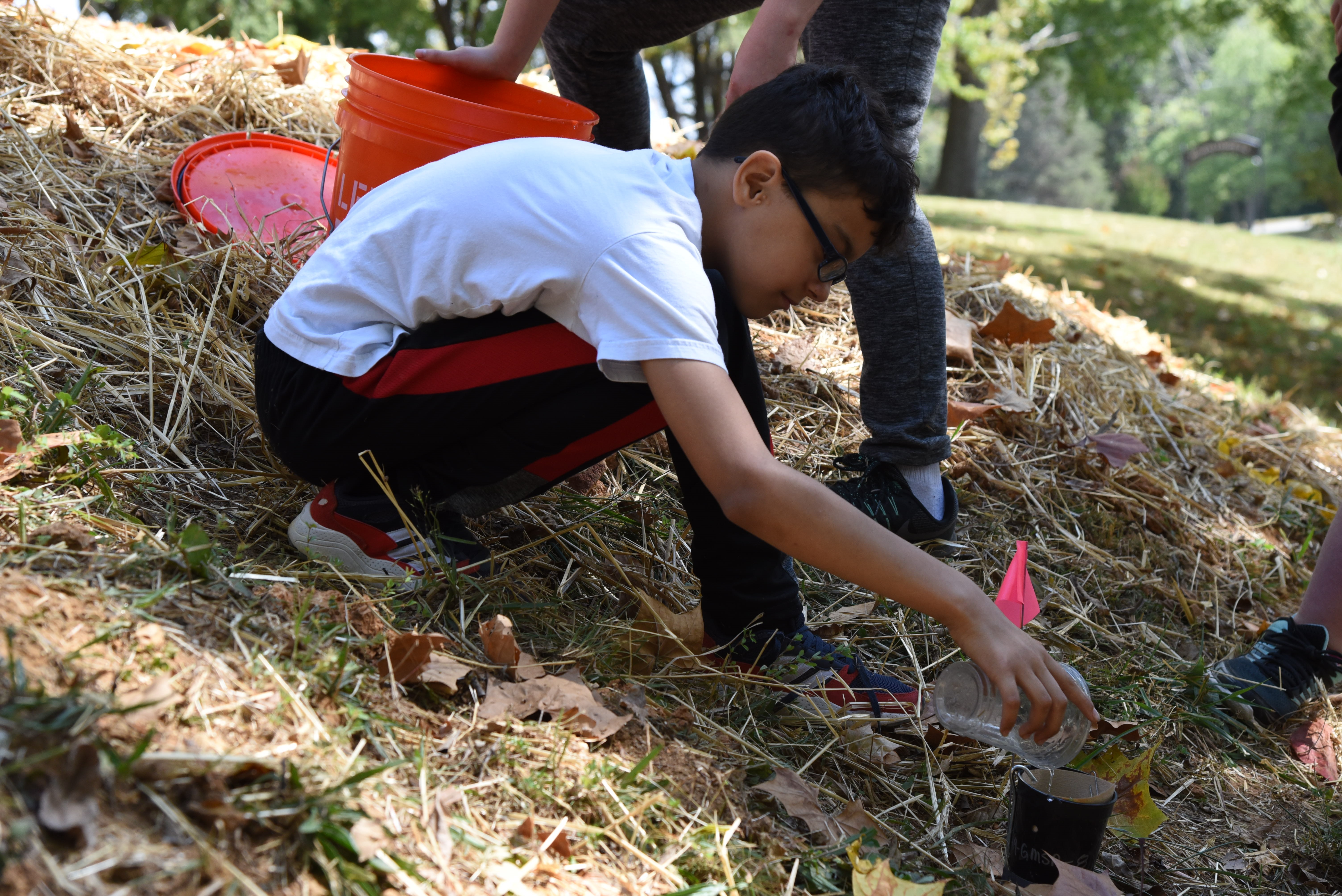 A Gresham Middle School student pours water into a mosquito trap on Sept. 24, 2019. Students at Gresham are participating in a research study led by the University of Tennessee Institute of Agriculture that aims to promote science careers and to increase understanding of how La Crosse encephalitis is transmitted by mosquitos.
Copyright © 2002-2022 Blackboard, Inc. All rights reserved.